This article will examine the scientifically proven impact of stand up paddling and similar sports to the psychophysical health of the individual.  First will be observed activation of skeletal muscle and physiological impact through improving the heart, circulatory system and other general health benefits. Furthermore, the anthropological impact of stand up paddle boarding will be observed on body composition, strength, endurance and motor development. Eventually it will be described the positive psychological impact of paddling as a content that is conducted in nature and allows you to distance yourself from everyday life and city life and spend a pleasant and relaxing sports activities.

What muscles do stand up paddle boarding work?

When stand up paddling, the following muscle groups are activated: abdominal, transverse abdominal, broadest back muscle (latissimus dorsia), trapezius muscle, and adductor muscles of the hip. Also, although the stroke is predominantly triggered by the upper extremities, hip and knee stabilizers work very hard and produce great strength and strength in the overall movement. Stand up paddling is an ideal exercise for the whole body where the agonists and antagonists of the anterior and posterior kinetic chains are constantly changing, thus activating the entire muscular system. Any activity that improves the stability of the torso is useful in the prevention of injuries and the development of general strength.

Conducting strength exercises on unstable surfaces has been proven to be a great tool for developing torso muscle endurance .. as well as proprioceptive and reaction capabilities, which reduces the chance of injury to the lower extremities.

As a final proof of the propriety of paddle boarding in an upright position to activate the torso muscles it is sufficient to point out the conclusion of the study that “in order to increase neuromuscular activation of the superficial muscles of the trunk, exercises should be used in standing instead of sitting, and unilateral exercises instead of bilateral”. And paddle boarding has just been described – the standing position of the body with predominantly bilateral movements when paddling. 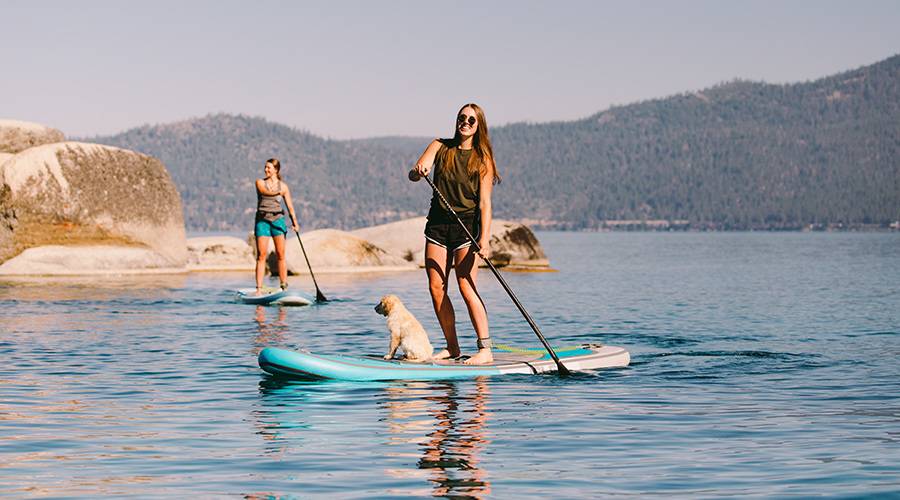 The positive physiological impact of paddle boarding was demonstrated through a study (Schram, B. et al., 2015) were 13 subjects, who completed the basic training program and techniques, practiced rowing 1 hour – three times a week for a period of six weeks. Significant changes occurred in the domain of aerobic endurance (+ 23.57%) and anaerobic endurance (+ 41.98%) and overall health (+ 18.99%). Also indicated is progress from 17.89% in psychological tests and quality of life satisfaction questionnaires. Further the positive effects are shown by the data from the same survey and confirmed positive progress in paddling performance itself as well as anaerobic strength indicators and a derivative of strength.

A very positive feature of paddle boarding is that the activity is always carried outdoors (lake, sea, river), which is much more useful than exercise indoors – gyms, gyms and the like. Open spaces and nature have been proven of a positive psychological effect on participants which in activities carried out in this way enhance different psychic characteristics.
Also, according to various researches in outdoor activities, participants develop their self-sufficiency, that is, they realize that they can independently solve life problems.

Astrand P.O. (2003) summarized why paddling and similar sports should be performed as often as possible in children and adults: “Frequent physical the activity of children and adults is crucial for normal growth and development and a major impact on general health in the developmental years and later life. ”
He also emphasizes the importance of outdoor activities for mental wellbeing and health and concludes: “Therefore, children should play at least 60 minutes a day in nature and conduct similar activities in kindergartens, schools and other institutions.”

How to Increase Your Stand Up Paddling Performance

How to Increase Your Stand Up Paddling Performance
$35.56
$44.95
in stock
10 new from $33.74
9 used from $26.95
Buy on Amazon
Amazon.com
Sea Kayaking and Stand Up Paddling Connecticut, Rhode Island, and the Long Island Sound

Sea Kayaking and Stand Up Paddling Connecticut, Rhode Island, and the Long Island Sound
$24.95
in stock
15 new from $18.94
7 used from $17.14
Buy on Amazon
Amazon.com
Stand Up Paddling & Kayak Instruction: Learn beginner to intermediate skills for paddleboarding,...

Stand Up Paddling & Kayak Instruction: Learn beginner to intermediate skills for paddleboarding,...
$18.95
in stock
Buy on Amazon
Amazon.com
The Art of Stand Up Paddling: A Complete Guide to SUP on Lakes, Rivers, and Oceans (How to Paddle...

WAVEY BOARD Inflatable Stand Up Paddle Board 6" Thick SUP Board PVC with Adjustable Paddle Backpack Pump and Bottom Fin for All Skill Levels Youth & Adult Surfboard
$299.00
Buy on Amazon

ABOUT US
The SUP Board Gear helps you find the best paddleboards. We review 20+ SUPs every year and write the most in-depth board. The best inflatable SUP boards for sale, as well as inflatable paddle board reviews, videos, and paddling tips. Browse our huge selection of stand up paddleboard gear and accessories. We have all your SUP equipment, including FCS fins, paddle covers, paddleboard bags, PFDs, SUP tape, paddle board leashes, board straps, and much more.
FOLLOW US
© Best Stand Up Paddle Board | Gear Guide | Reviews © 2021